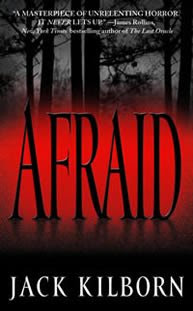 The US government spends billions of dollars training soldiers to kill. Now they’re attempting an alternative approach. Instead of turning soldiers into killers, the military has trained five psychopathic murderers to be part of a classified Special Forces unit.

They are the most fearsome weapon ever created, meant to be dropped behind enemy lines. Their goals: Isolate. Terrorize. Annihilate. Five Hannibal Lectors with Rambo training. But something horrible has happened...

A tiny community of families, retirees, and artists, nestled between Big Lake and Little Lake MacDonald in the northwoods. One road in, one road out, thirty miles away from everything. A town so small and peaceful they don’t even have a full time police force.

Hell has come to Safe Haven.

On their way to a mission, the Red Ops helicopter has crashed just outside of town. The team is now roaming free in the wilderness, heading for the nearest lights. Heading there to do what they do best.

Soon the phone lines are cut, the cell phones jammed, and the road blocked. Safe Haven’s only chance for survival rests on the shoulders of an aging county Sheriff. And as the body count rises, he’s quickly realizing something terrifying—maybe the Red Ops haven’t come to his small town by accident...

Are you afraid of the dark? You should be. You will be.

I came late to finding J.A. Konrath's blog (A Newbies Guide to Publishing), but have grown to love it and when I found out he had a horror novel coming out soon, I just had to check it out. And after reading the excerpt, I was sold. I just had to read the book!

I didn't get in on the month long blog tour Joe/Jack carried out but I followed along and read the reviews, chuckled over interviews and became increasingly eager to put Afraid to the test.

You see, I'm hard to please when it comes to reading for pleasure. And as a kid, I used to read Stephen King under the covers with a flashlight so I'm darn hard to scare. Who of us can forget, Carrie, Cujo, Pet Sematary, Misery or even The Dark Half. Gosh, those bring back memories:-) But I have to say, move over Stephen, Jack Kilborn's come to town. And he's really creepy!

I love this book! I'd have read it in one sitting, which I haven't done in so long I can't remember but I'd been up since before daylight, driven about 8 hours that day and by 11, my brain just couldn't handle being awake.

The bad guys are really, really bad. The good guys are people I'd like to know and call friend. While I wasn't frightened by Afraid, I found myself thinking about different scenes during the next couple days. Especially the toe chewing off thing. That was just creepy...but creepy in a good way.

If you love horror, I highly recommend Afraid. It's fast moving, never boring and will be on my keeper shelf.

In fact, I'm going to be trying a couple of J.A.'s other books too. I think I've found a new favorite!

So glad you stopped by. Look around, make yourself home. And, come back real soon.