It's not really my fault. Honest, I didn't start out as a sticky note person but when someone gives you a box filled with sticy note pads, you have to use them. So, over the past several years I've collected a stack of sticky notes. Most of them are notes about writing, passwords, websites or phone numbers.

Today as I was getting started, I decided to go through my notes and get rid of those I don't need. Some, I have no clue what they mean now so they got pondered and put back in the stack. Some, such as hubby's old cell phone number, got tossed.

Here's some that I kept. 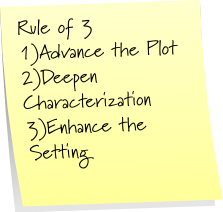 Romance story idea involving a zoo field trip...
Idea about a really nice guy who reads poetry at libraries during the day and kills bald guys on the night of the full moon.>br> Several ideas for blog posts about writing.
Two different lists of words to avoid such as that, was, were, just, very, and felt...
Two recipes. Peanut Butter Pie & Sock It To Me Cake, both are yummy by the way.
The Italian phrase "Tutto E Possibile" which means Anything is Possible.
Numerous writing tips such as...
Scene = Goal, Confict & Disaster

Scene = sequence of action that occurs continously in one place, time & POV. 1)What do we wnat reader to take away from the scene? 2) What will give dramatic power to scene?

The question "Does the scene balance action with visual details & dialogue?" I must have been focusing on scenes for a while:-)
Several ways to handle the revision process such as starting with the story, then plot, then dialogue.

The definition of a story: "A story consists of a sequence of action that occur when a sympathec character encounters a complicating situation the he confronts and solves."

All that to say, take notes of things you think are important. Save them for pondering later. Today, I found the reminder I needed among my notes.

"Write the first draft from the heart. Write the second from the head." C.S. Forester You can make your own sticky notes here.
Posted by Jean at 11:17 AM

So glad you stopped by. Look around, make yourself home. And, come back real soon.